NASA’s Curiosity rover has marked the 10th anniversary of its launch to Mars by sending back a spectacular ‘picture postcard’ from the Red Planet.

The robotic explorer snapped two black and white images of the Martian landscape which were then combined and had colour added to them to produce the remarkable composite.

Curiosity, which launched to the Red Planet almost exactly 10 years ago on November 26, 2011, took the pictures from its most recent perch on the side of Mars’ Mount Sharp.

It captures a 360-degree view of its surroundings with its black-and-white navigation cameras each time it completes a drive, before beaming back the panorama to Earth.

So inspired were the mission team by the beauty of the landscape, they combined two versions of the black-and-white images from different times of the day and added colours to create a rare postcard, NASA’s Jet Propulsion Laboratory (JPL) said.

Wish you were here! NASA’s Curiosity rover has marked the 10th anniversary of its launch to Mars by sending back a spectacular ‘picture postcard’ from the Red Planet (pictured) 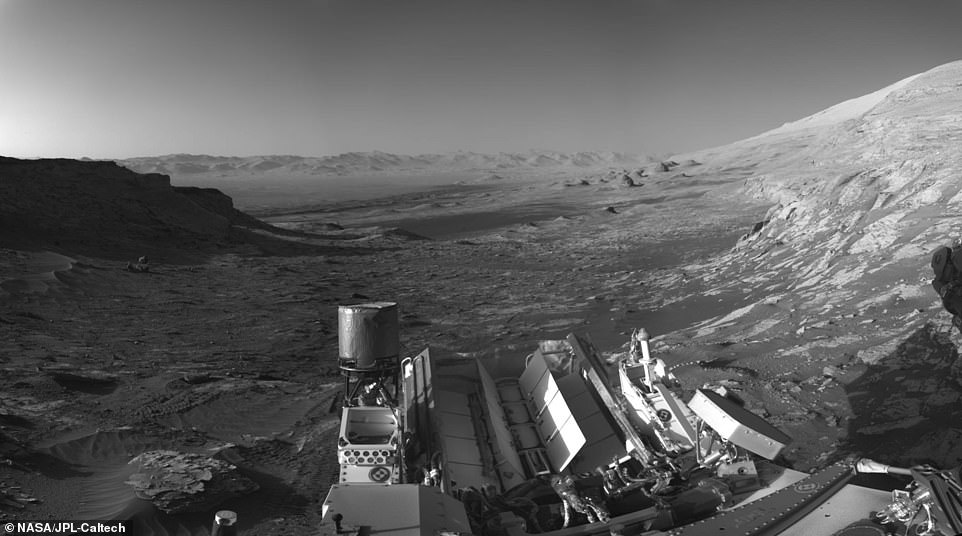 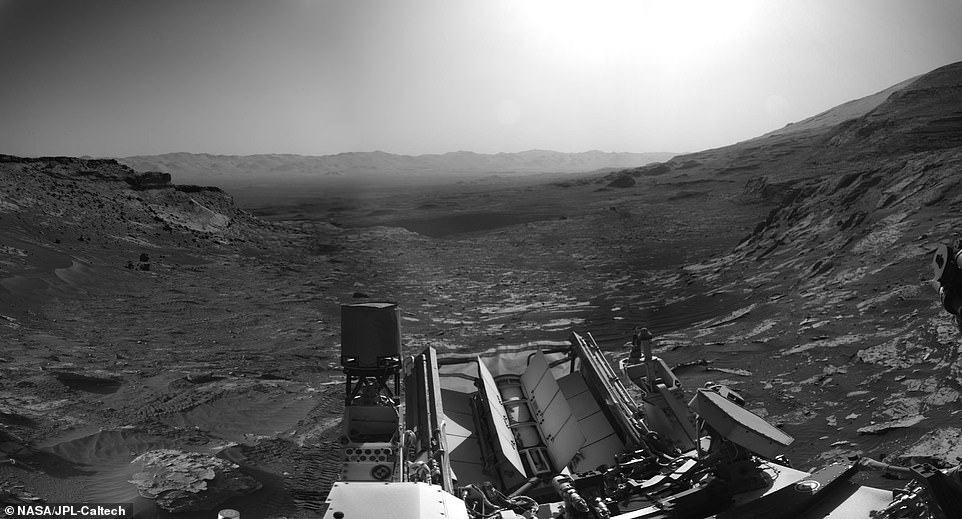 Curiosity captures a 360-degree view of its surroundings with its black-and-white navigation cameras each time it completes a drive, before beaming back the panorama to Earth

The Mars Curiosity rover was initially launched from Cape Canaveral, an American Air Force station in Florida on November 26, 2011.

It launched on the Mars Science Laboratory (MSL) spacecraft and the rover constituted 23 per cent of the mass of the total mission.

The rover was initially intended to be a two-year mission to gather information to help answer if the planet could support life, has liquid water, study the climate and the geology of Mars.

Due to its success, the mission has been extended indefinitely and has now been active for over 3,000 days.

In a statement, the team said: ‘Many of the rover’s most stunning panoramas are from the color Mastcam instrument, which has far higher resolution than the navigation cameras.

‘That’s why the team added colors of their own to this latest image.

‘The blue, orange, and green tints are not what the human eye would see; instead, they represent the scene as viewed at different times of day.’

Curiosity took the images at two different times on November 16: the first at 8:30 and the second at 16:10 local Mars time.

This provided contrasting lighting conditions that brought out a variety of landscape details, JPL said.

The team then combined the two scenes in an artistic re-creation that includes elements from the morning scene in blue, the afternoon scene in orange, and a combination of both in green.

At the centre of the image is the view back down Mount Sharp, or Aeolis Mons, a mountain that forms the central peak of Gale Crater.

Curiosity has been driving up the three mile (5km) tall mountain since 2014.

Rounded hills can be seen in the distance at centre-right and a field of sand ripples known as the ‘Sands of Forvie’ stretches a quarter to a half-mile (400 to 800m) away.

At the far right of the panorama is the craggy ‘Rafael Navarro Mountain,’ named after a Curiosity team scientist who died earlier this year.

Poking up behind it is the upper part of Mount Sharp, far above the area Curiosity is exploring.

The Curiosity mission is led by NASA’s Jet Propulsion Laboratory, which is managed by Caltech in Pasadena, California.

It is not the newest rover on Mars — that honour belongs to Perseverance, which arrived with NASA’s Ingenuity helicopter in February this year and is searching for ancient microbial life on the Red Planet.

Last week Perseverance collected its third Martian sample, this time from a rock ‘loaded with the greenish mineral olivine’.

The rover carries 43 titanium tubes, and as it finds a piece of rock of interest, it loads the sample into one of these tubes for later collection.

Billions of years ago, back to the earliest days of the solar system, the Jezero crater that Perseverance is scouting harboured a lake and river delta, making it a good place to search for signs of ‘life’.

NASA plans a mission to bring around 30 samples back to Earth in the 2030s, where scientists will be able to conduct more detailed analysis that might confirm there was microbial life.

However, Perseverance itself is not bringing the samples back to Earth — when the rover reaches a suitable location, the tubes will dropped on the surface of Mars to be collected by a future retrieval mission, which is currently being developed. 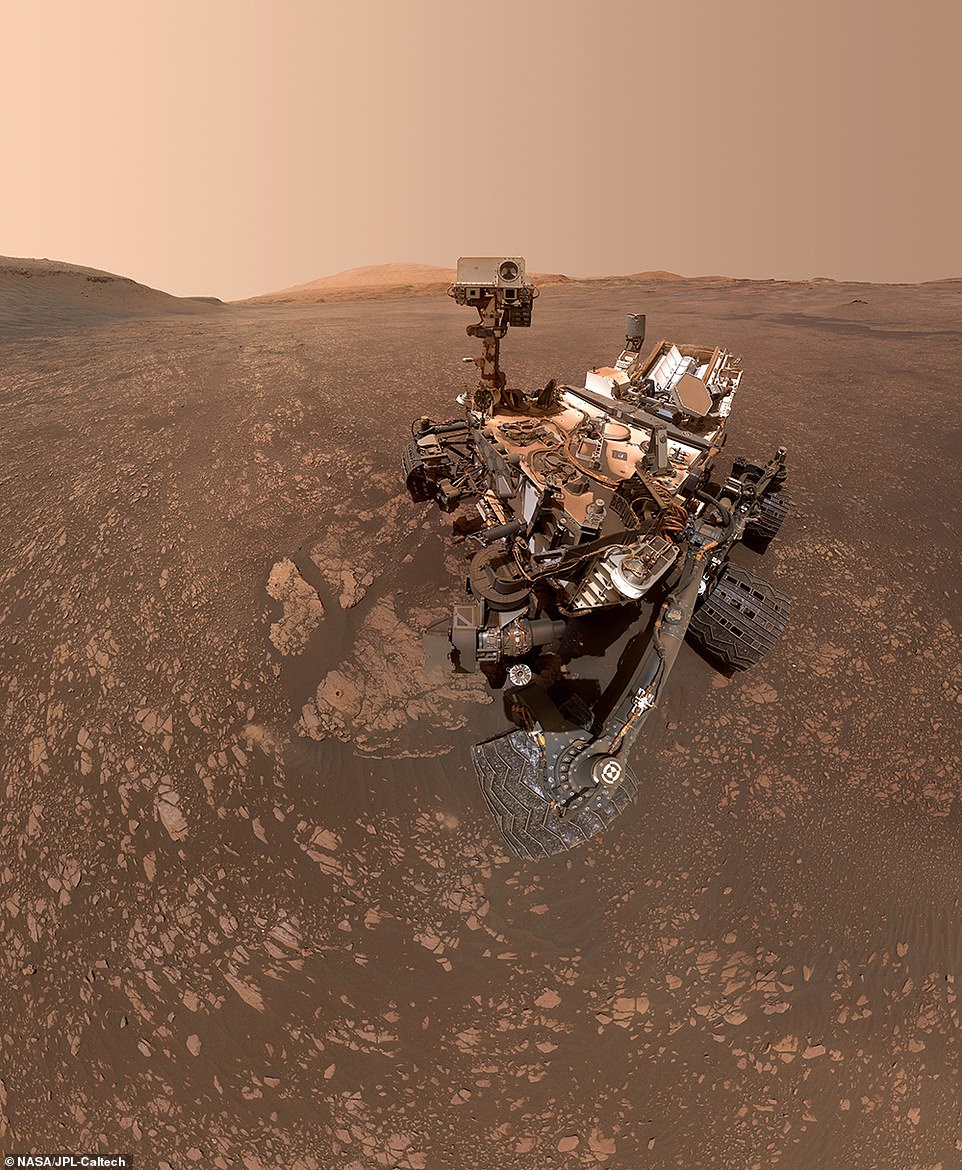 Curiosity (pictured), which launched to Mars almost exactly 10 years ago on November 26, 2011, took the pictures from its most recent perch on the side of the Red Planet’s Mount Sharp

Once Perseverance collects samples from Mars, it will drop them at a suitable location on the surface of Mars to be collected by a future retrieval mission, currently being developed.

NASA and ESA plan to launch two more spacecraft that would leave Earth in 2026 and reach Mars in 2028.

The first will deploy a small rover, which will make its way to Perseverance, pick up the filled sampling tubes and transfer them to a ‘Mars ascent vehicle’ — a small rocket.

This rocket will blast off – in the process becoming the first object launched from the surface of Mars – and place the container into Martian orbit, meaning it will essentially be floating in space.

At this point, the third and final spacecraft involved in the tricky operation will manoeuvre itself next to the sample container, pick it up and fly it back to Earth.

Providing its re-entry into the Earth’s atmosphere is successful, it will plummet to the ground at a military training ground in Utah in 2031, meaning the Martian samples won’t be studied for another 10 years.

WHAT EVIDENCE DO SCIENTISTS HAVE FOR LIFE ON MARS?

The search for life on other planets has captivated mankind for decades.

But the reality could be a little less like the Hollywood blockbusters, scientists have revealed.

They say if there was life on the red planet, it probably will present itself as fossilized bacteria – and have proposed a new way to look for it.

Here are the most promising signs of life so far –

When looking for life on Mars, experts agree that water is key.

Although the planet is now rocky and barren with water locked up in polar ice caps there could have been water in the past.

In 2000, scientists first spotted evidence for the existence of water on Mars.

The Nasa Mars Global Surveyor found gullies that could have been created by flowing water.

The debate is ongoing as to whether these recurring slope lineae (RSL) could have been formed from water flow.

Earth has been hit by 34 meteorites from Mars, three of which are believed to have the potential to carry evidence of past life on the planet, writes Space.com.

In 1996, experts found a meteorite in Antarctica known as ALH 84001 that contained fossilised bacteria-like formations.

However, in 2012, experts concluded that this organic material had been formed by volcanic activity without the involvement of life.

The first close-ups of the planet were taken by the 1964 Mariner 4 mission.

These initial images showed that Mars has landforms that could have been formed when the climate was much wetter and therefore home to life.

In 1975, the first Viking orbiter was launched and although inconclusive it paved the way for other landers.

Many rovers, orbiters and landers have now revealed evidence of water beneath the crust and even occasional precipitation.

The organic molecules preserved in 3.5 billion-year-old bedrock in Gale Crater — believed to have once contained a shallow lake the size of Florida’s Lake Okeechobee — suggest conditions back then may have been conducive to life.

Future missions to Mars plan on bringing samples back to Earth to test them more thoroughly.

In 2018, Curiosity also confirmed sharp seasonal increases of methane in the Martian atmosphere.

Experts said the methane observations provide ‘one of the most compelling’ cases for present-day life.

The magnitude of these seasonal peaks – by a factor of three – was far more than scientists expected.