It might soon be time to ditch that bulky phone case, as scientists have created an ultrahard glass that is even harder than natural diamonds.

The so-called carbon glass, which also has the highest thermal conductivity of all known glasses, was produced by researchers led from China’s Jilin University.

They synthesised it by placing ‘buckyballs’ — a soccer-ball like form of carbon — in an anvil press and subjecting them to extreme temperatures and pressures.

The sample pictured below, for example, formed at 30 GPa and 1,598°F, although production was possible at lower pressures and higher temperatures and vice versa.

The hardness achieved — around 102 GPa — makes it one of the hardest glasses presently known, second only to the recently-synthesised AM-III carbon (113 GPa).

It might soon be time to ditch that bulky phone case, as scientists have fashioned an ultrahard glass that is even harder than natural diamonds. Pictured: a sample of the carbon glass, around 1 millimetre across, which was formed at 30 GPa and 1,598°F (870°C)

The so-called carbon glass, which also has the highest thermal conductivity of all known glasses, was produced by researchers led from China’s Jilin University. Pictured: increasingly magnified transmission electron microscope images of the new carbon glass

What is ultrahard glass?

A team of Chinese scientists led from Yanshan University recently unveiled a transparent, yellow-tinted glass called AM-III, which is capable of leaving a deep scratch on a diamond.

The material, which is made entirely of carbon, reached 113 gigapascals (GPa) on the Vickers hardness test, while diamonds typically score somewhere between 50 and 70 on the GPa scale.

For comparison, the carbon glass produced by Dr Fei and colleagues only scored 102 GPa in the test.

AM-III, according to the researchers, is not a diamond replacement, but could be used to develop stronger solar cells in solar panels and tougher bulletproof windows that would be 20 to 100 percent stronger than current models.

‘The creation of a glass with such superior properties will open the door to new applications,’ said paper author and geochemist Yingwei Fei of Washington’s Carnegie Institution for Science.

‘The use of new glass materials hinges on making large pieces, which has posed a challenge in the past.

‘The comparatively low temperature at which we were able to synthesize this new ultrahard diamond glass makes mass production more practical.’

Carbon is able to assume a variety of stable forms, which differ based on their molecular structure. Some — like graphite and diamond — are highly structured, while others are disordered, or ‘amorphous’, like regular glass.

The hardness of each form is dictated by its internal bonds. Graphite, for example, is flaky because it has a two-dimensional arrangement of bonds, with layers of strongly-bonded carbon atoms in a flat, hexagonal pattern.

‘The synthesis of an amorphous carbon material with three-dimensional bonds has been a long-standing goal,’ explained Dr Fei.

‘The trick is to find the right starting material to transform with the application of pressure.’

Because of its extremely high melting point at a whopping 7,280°F (4,027°C), it is impossible to use diamond as a starting point to make diamond-like glass.

Instead, the team turned to buckminsterfullerene, a form of carbon composed of 60 atoms arranged in a hollow, cage-like structure that resembles a soccer ball, a fact that has given it the popular name of ‘buckyball’.

The discovery of buckyballs was honoured with the Nobel Prize in Chemistry back in 1996. 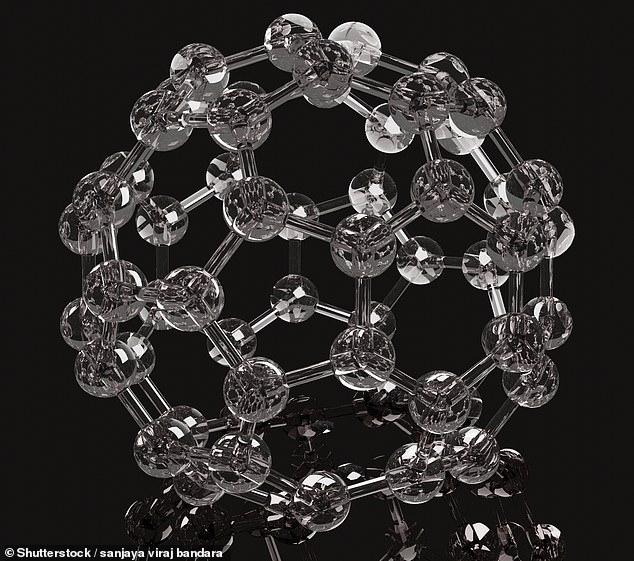 Because of its extremely high melting point at a whopping 7,280°F (4,027°C), it is impossible to use diamond as a starting point to make diamond-like glass. Instead, the team turned to buckminsterfullerene, a form of carbon composed of 60 atoms arranged in a hollow, structure that resembles a soccer ball, a fact that has given it the popular name of ‘buckyball’

To turn buckminsterfullerene into a diamond-like carbon glass, the researchers compressed and heated buckyballs in a so-called large-volume multi-anvil press.

This process collapsed the ball-like molecules, inducing local disorder while retaining a diamond-like short-to-medium-range order. While the resulting glasses were small, at around 1mm across, they were large enough for characterisation.

The findings, they added, ‘may enable new applications for amorphous solids.’

‘For decades [our] researchers have been at the forefront of the field, using laboratory techniques to generate extreme pressures to produce novel materials,’ commented Carnegie Earth and Planets Laboratory director Richard Carlson.

The full findings of the study were published in the journal Nature.

HOW DO SCIENTISTS ‘GROW’ DIAMONDS IN A LABORATORY?

Diamonds fetch their lofty price tags because they form over millions of years under high pressures and temperatures deep within the Earth’s crust.

But a number of companies are now growing the gems in laboratories across the world, threatening to shake up the diamond industry.

A small ‘seed’ diamond acts as a scaffolding for the process.

Scientists first place this seed into a vacuum chamber to remove impurities from the air.

Lab-made gems are threatening to upset the diamond industry, with several companies worldwide now growing the stones for jewellery. In this image Pure Grown Diamonds CEO Lisa Bissell unveils a lab-cultivated diamond in New York in 2015

They then funnel hydrogen and methane gas heat to 3,000°C (5,400°F) into the chamber to create a highly charged gas known as plasma.

The gases rapidly break apart, releasing carbon atoms from the methane that collected on the diamond ‘seed’.

These atoms naturally copy the crystal structure of organic diamond, which is also made up of carbon atoms.